Isnt kitten season a cheerful sounding name? Kittens are cuddly and cute so it should be a good time, right? Wrong. I hate kitten season. My phone rings off the hook with people who have kittens that need to be rescued and most often those people are willing to help very little. We're a small rescue but people assume we have endless resources and space. I had to shut the waiting list this week as it was at 30 and we have no room anywhere. We've also been hit pretty hard with medical bills. So we need an endless supply of money and about 10 times more foster space. Blah.

The lady who rescued Chamomile and her kittens called me. (Chami was semi-feral when we took her in. She literally clomb the walls and I had this moment of "Dear God, what have I dont agreeing to foster this cat?' Luckily she was young and with time and patience she tamed up really well and is in a wonderul home.) Theres another semi-feral cat with three kittens in her storm drain, same place Chami was last July. She cant take them into her house as her three cats will get upset. (Oh if only my cats had known they had that option!) Only one other rescue (Saying they dont know if they can help or not.) has called her back despite calling all the numbers I gave her. I have no space anywhere. I have kittens in two different dog crates and our bathroom so all my kitten space is filled. All the other foster homes are full and of course not all of them would be keen to foster a semi-feral mom. I also have a mom and kittens on the list before this one who are in a less than safe place. I'm going to at least try and talk this woman into putting a large dog crate on her porch and trying to get the mom and kittens in there. It's safer than a storm drain.

When I'm feeling down I dont post. Not good I know. I should post more then as it helps me a bit but it's hard to get motivated. I have two really cute kittens I have to tell about. I'll do that in the next few days with their pictures. Each has a story, one proving what a sucker I am and the other being pretty miraculous.

This is my third season being the kitten intake coordinator and for the first time I have lost a kitten who was in a foster home. I have had a few who didnt make it home from the vets, being too sick to survive, but this is the first one to die in a foster home. 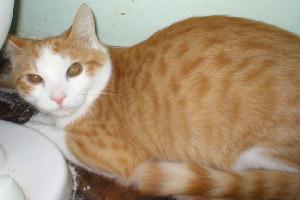 Adobe came in with his sister, Jabber. They were kittens in a feral colony in a town near here and I agreed we could take them. They both turned out to be Feluk positive. They have been in their foster home since last fall and doing well. Adobe got very sick suddenly and despite the best medical care it was obvious the Feluk was taking him.
God, I hate that disease.

On the upside (Can you tell I am an optimist at heart? I make myself nuts sometimes.) Archie is doing really well. He has hypertrophic cardiomyopathy and it looks like we have got the medication right. He's such a handsome guy and a real sweet boy. Guess I need to get around to posting some pictures of my foster babies one of these days.
Posted by Jenn and The Cats of Castle Coull at 12:36 AM 1 comment:

My desert island music choices-What would your 21 be?

Create your own Music List @ HotFreeLayouts!
Posted by Jenn and The Cats of Castle Coull at 4:26 PM No comments: