1. Read 45 books - Done
2. Read mostly from my 2012 boxes of books (Picked out ahead of time) - Kinda
3. Finish all books carried over  - Done
4. Read a lot from series I have already started - Done I read a ton of the Aunt Dimity series.
5. Try some new authors I already have books by from a list of authors and books I chose. The only two I read were Robyn Carr and Wendy Corsi Staub (and not the book I had picked out either.)  So not so good on this one but I enjoyed the two I did read.

2012 was an interesting year for me reading wise.  It was a tough year for me personally and I think that showed in my reading as my reading was a bit sporadic at times.

Over all I read books by 32 different authors (2 I didn't finish), including 18 new to me authors.  I fell in love with Robyn Carr & M.C. Beaton's books, discovered Shannon Hale, Susan Beth Pfeffer, Ally Condie and Tara Altebrando.  I feel like I read some really good books this year, ones that will stick with me and that I'll remember.

Going forward my reading goals for 2013 are:

1. Read 46 books
2. Finish all books carried over (There were three but I finished one last night, so down to two.)
3. Try some new authors I already have books by.  The authors I have chosen are :

Richard and I both got new chairs for our library for Christmas and it has made the room so wonderful to read in.  I really want to have fun reading this year, finding some new authors I love and just enjoying the world of books.  Happy Reading everyone!

Posted by Jenn and The Cats of Castle Coull at 5:58 PM No comments:

In December I read three books. 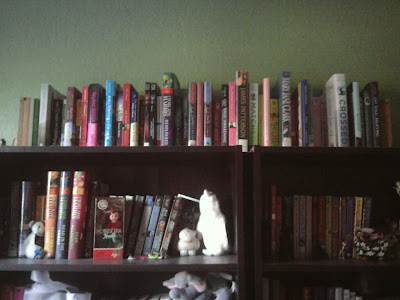 Death of a Cad by M.C. Beaton - 4 stars - I just love this series. I had no idea who the killer or why was till Hamish explained it all. I love a mystery that keeps me guessing.

When Christmas Comes Again: The World War I Diary of Simone Spencer, New York City to the Western Front, 1917 by Beth Seidel Levine - 3 stars - An interesting read about a time I don't know much about. I know surprisingly little about WWI and knew nothing about the Signal Corps before reading this book. This book was well written and interesting.

Believing (Lily Dale #2) by Wendy Corsi Staub - 4 stars - I really liked this book, though the middle part went a bit slow. The story line with her moms past is really interesting and I can't wait to see what happens in the next two books.
Posted by Jenn and The Cats of Castle Coull at 5:46 PM No comments:


In November I read four books. 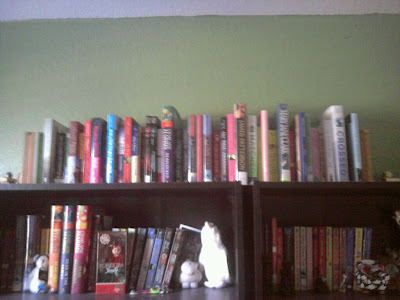 The Bathtub Reader: An Amusing Miscellany for the Discerning Mademoiselle by Carrie Bell & Amy Helmes - 4 stars - A fun, light read. I loved some of the info I got from this book. A perfect car book.

Crossed by Ally Condie - 4 stars - I didn't love it as much as Matched but it was still a really good book. It made me sad, made me think and mostly made me want to know what's going to happen in the end. I am going to a reading by the author this month to get the last book in the trilogy and I am really looking forward to it.

On What Grounds by Cleo Coyle - 3 stars - A cute, fun mystery. She went on a bit too much about coffee tips (how to store beans, how to make espresso, ect.) & there was one plot point I thought was glaringly obvious but those are the only negatives. I didn't guess who the bad guy was and that's always a plus in my book. I would definitely read more in this series.

Austenland by Shannon Hale - 5 stars - I just loved this book. It was fun, romantic and creative. I really liked that the main character had issues with men but wasn't an air headed pushover (my biggest complaint with so much of chick lit heroines.) There were some great lines in this book and I was thrilled to read they have made a movie (It hasn't come out yet) and a sequel to the book came out last year. Austenland was definitely a great read.

Posted by Jenn and The Cats of Castle Coull at 5:33 PM No comments:


In October I read six books. 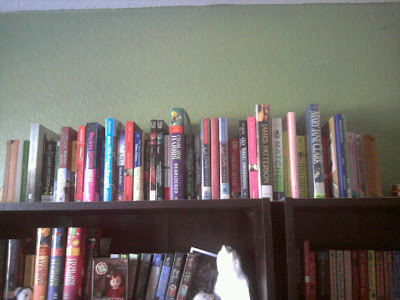 Do You Want To Know A Secret? by Mary Jane Clark - 4 stars - Well written and surprising. I never guessed who the murderer was. I really like MJC's style.  It's been years since I read any of this series and I had forgotten how much I enjoy it.  Extra cool that part of it was in Houston too.

Do You Promise Not To Tell? by Mary Jane Clark - 3 stars - A good read (though there were a crazy amount of characters to keep up with) that kept me guessing all the way through.

Sabine's Notebook: In Which the Extraordinary Correspondence of Griffin & Sabine Continues by Nick Bantock - 3 stars - Oh so odd yet so intriguing!  I read the first of these years ago and was thrilled when I recently found this one.

Aunt Dimity and the Duke by Nancy Atherton - 3 stars - Sweet, funny and a lovely mystery.  It was fun to see how some of the characters in the series met.

Further Under the Duvet by Marian Keyes - 3 stars - Some great essays, odd short stories and intriguing glimpses of Marian Keyes real life.  I kept this book in my foster cats room and read it off and on. Hannah and Addison enjoyed it immensely and are now Marian Keyes fans. :)

Death of a Gossip by M.C. Beaton - 5 stars - How is it possible I gave never read anything by M.C. Beaton before? I loved this book! It was charming and funny and kept me guessing. I loved Hamish Macbeth. I was certain I knew who the killer was from early on and was totally wrong. I can't wait to read more in the series.  (I read Hamish in Robert Carlyle's voice the whole way through the book.)

I also tried to read Fireside by Susan Wiggs this month and decided she was definitely not for me.

The read-a-thon helped me finish up some books and got me going towards my goal.
Posted by Jenn and The Cats of Castle Coull at 5:26 PM No comments: