Once upon a time there was a kitty named Baby Boy. For a long time he was a stray kitty, with no person to call his own. He had a rough life, with no soft bed and never enough to eat. But God had plans for the kitty and eventually he ended up with his person. His person was a girl, no one special or spectacular, not a movie star or celebrity. But she loved him very, very much and when Baby Boy looked at her he didn't see just a person, he saw his person. This person loved him and he knew that beyond a shadow of a doubt. This girl taught him that hands were meant to pet and stroke and never hurt. She showed him that he would never have to be hungry again and he would always have a soft place to sleep. None of the other animals in the girls house were ever mean to him and for the first time Baby Boy was a happy cat.

But all those years of living on the street had been hard on Baby Boys body and he wasn't a young cat anymore. Soon it became clear he was sick and the doctor said he didn't have long left. The girl hugged Baby Boy tight and told him how much she loved him. She said it was up to him now, if he was ready to go she wouldn't hold him, but if he wanted to fight she would fight along with him every step of the way. That very day Baby Boy amazed the doctors by perking up and acting as if he felt better. The girl nursed him and loved him and he surprised everyone by how well he was doing. He proved everyone wrong who thought he was just an old, frail kitty. He had months, beautiful, meaningful months, during which he was as spoiled and pampered as any kitty can be. He blossomed during those months and was so happy. He finally knew what it really meant to be loved and treasured. When the months were up and his time on this earth was up he once again knew how very loved he was, as his person petted and stroked him as he took his last breath. He purred the whole time so she would know he loved her as much as she loved him.

The story could end there and it would be a nice tale of one cats life who was changed. But it's so much more. I sit here, two years to the day that Baby Boy left this earth, crying because I still miss him with a pain that takes my breath away. He was an amazing cat who touched so many lives. I'm so very thankful that I got to be his person. All I did was love him and for me he was so easy to love. In the time he's been gone I haven't just been mourning. I've been taking care of his legacy. Richard and I have fostered many, many cats and kittens since Baby Boy left us. Each one has heard about him and each one owes him a debt of gratitude. He motivates me to
keep rescuing and fostering. Many, many cats are alive today because of him. Who would have imagined one stray cat could make such a difference? He certainly changed my life. I may never win an Oscar, an Emmy or the Noble Peace Prize but I have one great honor in my life that means more to me than any of those ever could. I got to be the girl who taught Baby Boy what love was. And every time a scared cat comes into our home, every time we get a new litter of foster kittens or a shy adult kitty who needs some extra attention, Baby Boy's legacy lives on. 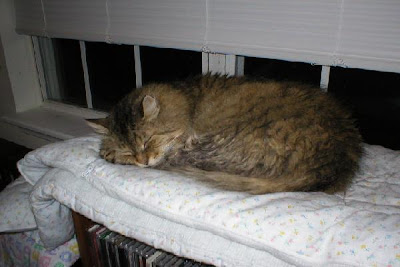 Posted by Jenn and The Cats of Castle Coull at 4:49 AM No comments: Links to this post