The Jury by Fern Michaels 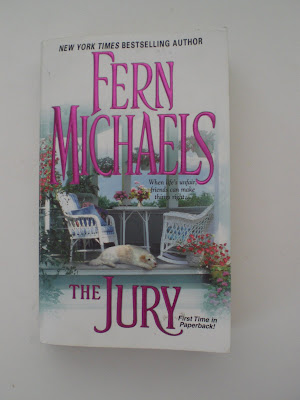 I finished this book early on this month and am just now getting around to posting it (A bit of housekeeping before tomorrow's read-a-thon). This is the fourth in The Sisterhood series and my least favorite so far. It felt a bit disjointed to me. Having said that, I love this series and it came as such a surprise to me. I was not expecting to be sucked in by it and yet, I have been! Since I started the series back in June I have always had one of the books going. I rarely do that with a series, preferring to space them out. But I have been so intrigued with the characters and the whole premise of the books (A group of women who seek revenge on those who have done them wrong and whom the justice system has failed to punish.) that I have kept reading. I am currently reading the next in the series, Sweet Revenge, along with four other books. If I wasn't reading other books at the same time I could have quite easily finished the series by now. I am so glad there is a follow up series that is currently being written. I will have more books to read in the Sisterhood series for quite a while to come!
Posted by Jenn and The Cats of Castle Coull at 1:18 AM