We hadn't planned on adding any more cats to our family after adopting Rollo and Coal, at least not for awhile. Two little girls had other plans however. 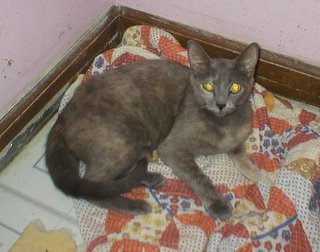 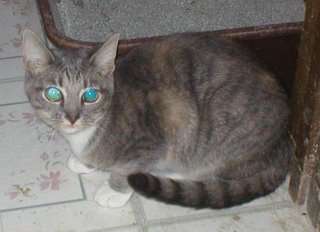 Andie was found after a housefire in a local neighborhood. Some neighbors took her to a woman they knew was an animal lover. She was disabled however and the only space she had for Andie was an abandoned trailer. To make matters more complicated Andie was pregnant and quickly gave birth to five kittens. The woman called our rescue and we quickly got Andie and the kittens into our main foster home. Andie was a skinny, frightened kitty but she immediately trusted Richard. She quickly became his shadow. She would sit on his lap while he scooped litter boxes, talk to him as soon as he entered the room and generally made it known that she had chosen him as her daddy. Most of Andie's kittens got adopted fairly quickly. Only two were left, Slim, a handsome gray and white male and Mandy, a very shy little cutie who adored her mommy. Andie and her were tightly bonded, so much so we didn't want to adopt them out separately. We weren't fostering any adoptable cats at this point so we didn't usually go to the adoptathons. One one occasion there was a couple interested in Andie and Mandy and Richard went to meet them. They were less than nice, had no connection with the girls and kept going on and on about how shy there were. I couldn't believe how mad Richard was when he got home afterwards. I had a feeling then these girls weren't going to anyone else's home. I have to give Richard credit, he really did try not to get attached. Of course it didn't work. And finally, when coming home after an adoptathon Andie came running out her carrier, chatting the whole time and jumped up on Richard's look with the most put out expression on her face it was very clear she didn't want to go to anyone else's home at all. We had a big multi adoptathon coming up and I told Richard if the girls didn't get adopted then I was adopting them for him as a late birthday present. He didn't even try and argue. 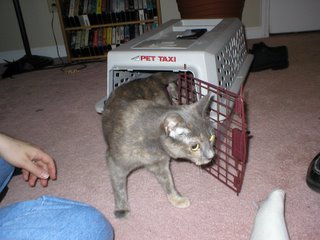 The girls didn't get adopted so a week later both Andie and Mandy came home with us. They spent a week in our downstairs bathroom and at the end of the week were out about in our house like they had always been there. (It took Rollo and Coal much longer to be ready to be out all the time. They spent the majority of their first three months in a spare bedroom, having little trips out in the house before they were comfortable enough to stay out all the time. One night Coal just refused to go back in the room and we took this as a sign they were ready. Cats tell us so much about what they need if we only listen.) We really cheated on integrating them into our household since they were from the same foster home and even the same room as Rollo and Coal. They all greeted each other very casually "Oh are you living here now too?", gave each other a few "I know you" sniffs, and settled down to life as brothers and sisters. Mandy was right at a year old when we adopted her so she's the closest to a kitten we have ever adopted. She holds the title of eternal kitten in our household and is just as spoiled as you can imagine any baby would be. Since Andie was so young when she had her (Not even a year old) the girls have barely a years age difference and are great playmates. Mandy has slowly gone from a shy little girl to a very affectionate, cuddly one. She can usually be found either sleeping on the arm of the couch near her Daddy's head or laying across my chest. Andie is a typical Tortie. She is extremely smart, full of personality and extremely personable and outgoing. She greets all visitors to our house and if they fail to greet her back she will tap them on the arm till they respond. She is very cuddly and sweet with me but she is 100% a Daddy's girl. The world revolves around Richard for Andie. If he's late coming home she sulks. If we get a new foster cat and she thinks he's paying attention to them and not her she sulks. If he dares to have his laptop on his lap and not her she sits on my lap and glares at him till he puts the laptop away and she can reclaim his lap. She is a happy cat who got what she wanted most; A home for her and Mandy, with her Daddy. 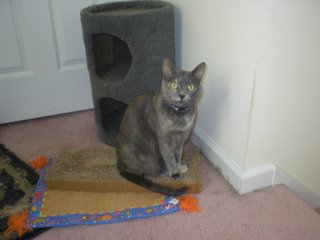 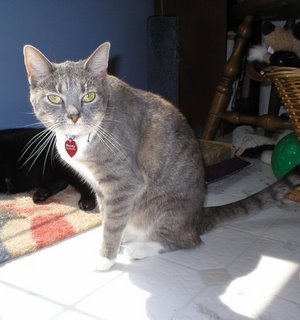 Posted by Jenn and The Cats of Castle Coull at 11:48 AM