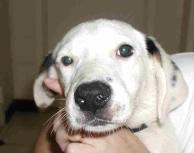 My stories about my kids always start with one. Oreo. I got Oreo when I was 11 from a shetler in NJ. She was with me for almost 17 years. We lost her, my baby dog right before we moved to NC. She was the most amazing baby. People who didnt even like dogs loved Oreo. She had survived Parvo as a puppy (She never reached her full size because of it) and was the first animal Richard ever loved. It was extremely hard to get another dog after losing her. I still cant see a German Shorthaired Pointer without getting emotional. I agonized over getting another dog. I wanted one but it just was so hard. I kept looking at dogs on Petfinder but I just couldnt do it. Then I saw Nilla. I have a soft spot for active/hyper dogs and I had always wanted a Dalmatian. She was a Dalamtian/Lab mix. At the time she was named Alexis, was almost 6 months old and was in a low kill shelter. Low kill still doesnt mean no kill and her days were numbered. We were getting ready to go to Chicago for a work trip. We spoke to the shelter and planned on picking her up on our way back. We drove back from Chicago as fast as we could and arrived not long before they were to close. Nilla came bounding out and it was love at first sight. She was playful, sweet and just as active as Oreo had been as a puppy. (Oreo was named after Oreo Cookies and Cream Ice Cream, so to keep up the theme I wanted another Ice Cream name. Vanilla Bean fit perfectly.) Her first Christmas was so much fun. Nilla is very smart and she loved unwrapping presents. We videod her first Christmas just like proud new parents. I strongly believe Oreo had a hand in us getting Nilla. She is one of the most easygoing babies. She loves people, loves cats and is amazingly loving. She's our princess. 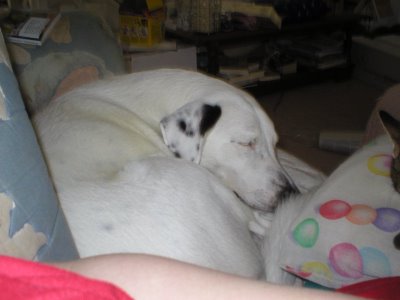 Posted by Jenn and The Cats of Castle Coull at 5:09 PM