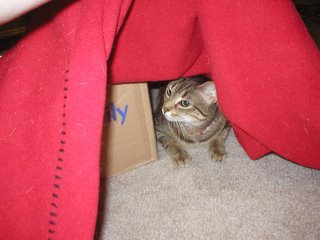 We started volunteering at a local cat rescue in the summer of 2002. I wanted a cat. Richard wasn't sold on the idea as he had never had a cat. At the time Nilla was being treated for heartworms so we couldnt add another animal till she got the all clear anyway. So we had time to meet some of the cats and get to know them. We started helping out at the main foster home, cleaning litter boxes, feeding the cats and playing with them. I wanted a black cat as my childhood kitty had been black and I know they are not easily adopted (Alot of people still have really dumb ideas when it comes to black cats.) None stood out to me as my cat. There was one we considered named *Simon, a gray tabby but we werent completely sure.

Then a kitty was returned from her home. She had been in her home since she was a kitten and now the couple was getting divorced. The husband had suddenly become allergic to the cat and neither of the people wanted her. So back she came to a foster home. We only have a few cages there, since for the most part the cats are free to roam, but we have a few for returns, cats who hate other cats, medical cases, ect. Millie was a 2 year old brown tabby. She came back to her foster home absolutely scared. She huddled in a cage and looked like she was trying to pretend none of this was happening. The first week we were there to clean we left her alone, hoping she would be a bit more settled down by our next visit. The next week we cleaned her cube out and she was just as scared. I talked to her in a soft voice, wrapped a soft blanket around her and told her it would keep her safe. She snuggled her head into my hand and I was lost. It is the one and only time I have gone home and cried. Nilla was due for a vet check the next week and Richard immediatly said if she was ok then Millie could come home with us. I set about thinking of a new name for her. A new life deserves a new name and names are very important to me. I am admittedly a huge comic book fan. I love the X-Men and my favorite character has always been Jubilee. It also happend to be the Queen's Golden Jubilee year and a Jubilee was a celebration. So Millie was to be renamed Jubilation Lee. Nilla checked out fine at the vet and Jubilee came home with us the next weekend. She spent her first week in our small bathroom with little visits out in the house to get her used to the surroundings. By the end of the first week she was ready to be out and about in the house. She was fine with Nilla and she settled down really well. Jubilee is the perfect cat. She doesnt jump on the counter, she doesnt get into things and she is pretty self sufficient.

Three years after coming to live with us she is a very sweet, affectioate cat. She is also the most stubborn creature on the face of the earth. I researched cat food when we adopted her and discovered how important wet food is to a cats diet so I wanted her to eat it. Richard got a great kick out of watching me pull my hair out trying to get her to eat food food. For years the only wet food she would touch was supermarket junk food. Finally, we found one premium food (Merrick) she will eat. We all rejoiced. Jubilee is our number one cat. We dont love her any more than the others but there is just something very special about her. Initially she was pretty aloof and tempremental. Now she sleeps beside me almost every night. She tolerates our other cats but she spends most of her time in our bedroom. Since she's the Queen she has her food seperate from the others in there. Spoiled? You bet!

(*Simon was actually adopted about a week after we adopted Jubi. It worked out well as he hates other cats so he went to a single kitty home. We all got happy endings.) 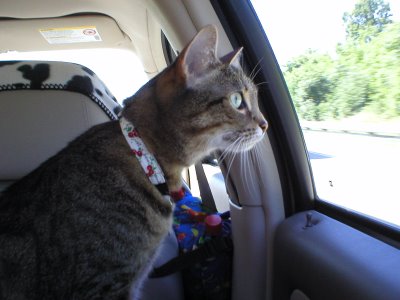 Posted by Jenn and The Cats of Castle Coull at 5:31 PM